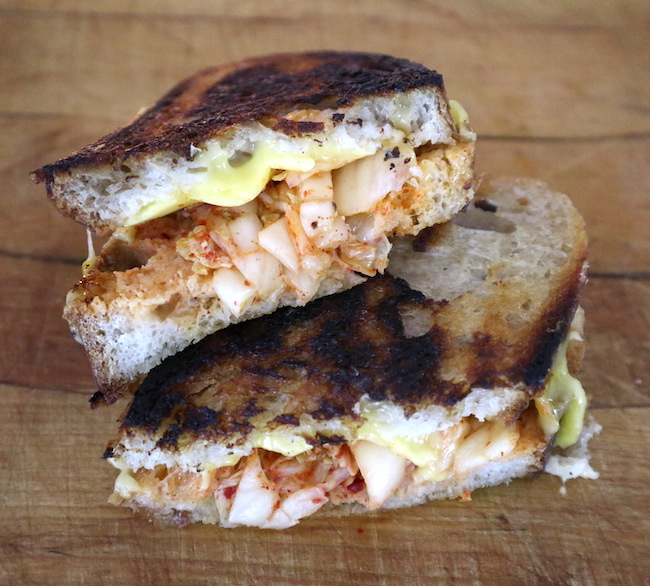 For a Christmas gift this year, I got Samin Nosrat’s Salt, Fat, Acid, Heat cookbook.

I have been in love with Nosrat since I discovered her on a cooking show a while back, and was tickled pink when she released the Netflix documentary based on her cookbook (see some of my other favourite Netflix cooking shows here)

What I love about Nosrat is that she is truly a food nerd. I spend a lot of my time doing chemistry experiments in the kitchen, and so does she. I feel like I could just nerd out with her.

Her cookbook is huge, but also in some ways not so much a cookbook and more of a how-to guide. She explains, in great detail, the properties of salt, fat, acid and heat, and how to use them to make the best possible food.

Oh by the way, she has a pandemic podcast as well.

One of things Nosrat has been very vocal about loving is a Kimchi Grilled Cheese.

Now, if you are at all familiar with this blog, you’ll know that, despite not being even a tiny bit Korean (that I know of), I love KimChi. For those of you unfamiliar, KimChi is a fermented cabbage condiment that has been made for thousands of years in Korea. Its base is cabbage, and then you add salt and spices to it and let it sit for about a week and it gets all funky and spicy. It’s weird and hot and also because it’s fermented, it’s really great for your gut health.

KimChi, however, is usually made with fish sauce, so it’s not considered to be vegan. However, we have a local Vancouver business that does make a vegan version, and I’ve been loving Salty Cabbage KimChi since they launched a year ago, and have been including it in loads of recipes.

But I’d never had a KimChi grilled cheese.

Nosrat is right. It’s great. I used a nice crusty homemade sourdough bread, and the play of the textures and flavours makes this a winner. You’ve got the crusty bread, the spicy, funky kimchi, and the soft, melty, fatty cheese.

If you aren’t vegan, or you don’t want to make it vegan, just use regular cheese.

Here’s how to make a Kimchi Grilled Cheese: